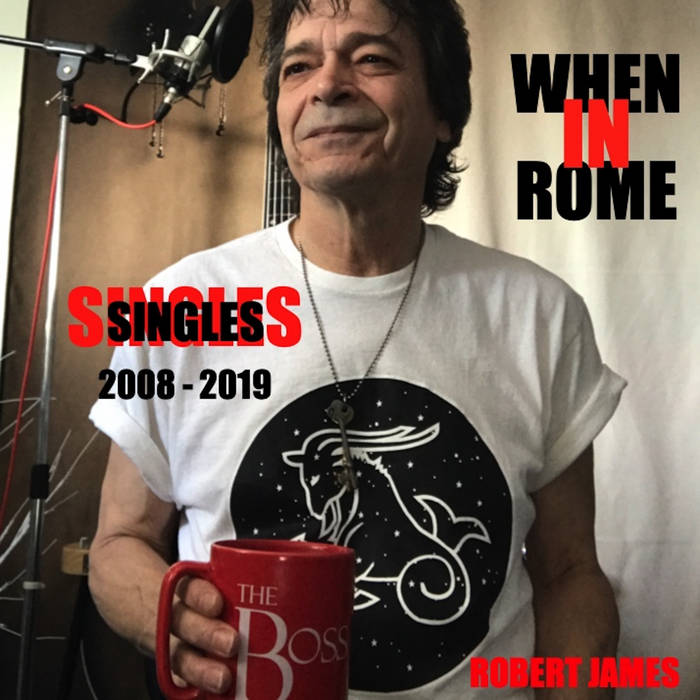 When In Rome (Singles 2008 - 2019). Eleven years. Eleven releases. This When In Rome collection is exclusive to this site. The singles can be found elsewhere. Wherever you search for your music. A few exceptions though. The remastered versions of PIECE OF ME 2013, BALLAD OF CORA GREY 2010 and SANTA’S ON HIS WAY 2008 are exclusive mixes. You guessed it. Available here. Only. A fella has to have some secrets. I find it rather handy to have these nuggets assembled together in a little package. A nice little bundle to scope through. Ha. That’s what I’m doing now as I revise these liner notes. This is our first of two singles compilations. Just the commercially released singles. Starting with ROCKETSHIP 2019 and working our way backwards. This order works well for me. And with our second singles compilation …Or In Cyprus, we’re doing an about face. We start with LOVE BUTTON 2020 and work our way forward as the playlist progresses. Allowing me to take stock of 2020. These two compilations comprise every commercial single released by Robert James. They're all here. And some regrets. Due to publishing and copyright legalities, part of the vault must remain closed. But we’ve managed to scrape together roughly thirty seven minutes. And looking back at this package I smile. The amount of hours. The friends. And magic moments. So many of them. Highlights I will cherish all the live long day. It’s so nice to know I haven’t missed anything. Unpack your suitcase. Everything’s here. Enjoy your stay. You know what they say. When in Rome … xoRJ

A very special thanks to:
Bertil Joseph: Rest in peace and thanks for all
Sid Perez: Always above and beyond. The guru …
Kevan Van Keith: A most excellent time … what stop sign.
Mark Gordon: Such a treat, my brother …
Malcolm Summersby: RIP. Hope you like this stuff.
Jett Black: Always on the groove ... shine on
Thanks also to Mainline Sound. Let’s be vibing out …

Special Thanks to Apple Logic and Landr … Still an apple a day.
The usual suspects were abused: Fender, Martin, Gibson, Ovation, Gretsch & Hagstrom guitars. Amplification by Fender, Traynor, Marshall & Gretsch. As per the norm.
Special Thanks to brother Darcy for selling me the Drum Kit.
Smiles in heaven? To Daddy. Always.
For family, friends & fans … the three F’s that keep me going.
In the true spirit of things, no guitars were hurt. On any sessions.
*To see individual track listings and album art
please click on the song title … If we’ve forgotten
anyone in the main credits (heaven forbid), they’ll show up
there … oops?